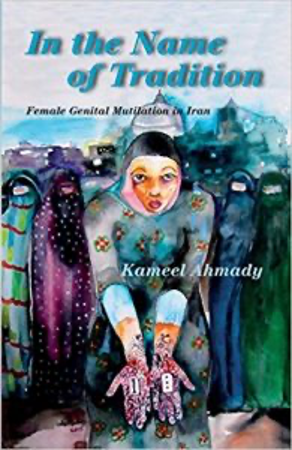 In the Name of Tradition, FGM in Iran – Kameel Ahmady

Language of the text: English

Kameel Ahmady is a socio-anthropologist from Iran.
Target Researchers, students, employees of associations working against FGM, other people interested in the topic of FGM in Asia.

Subject covered by the publication

The book “In the Name of Tradition” focuses on the practice of female genital mutilation in Iran. Kameel Ahmady has spent several years working in humanitarian NGOs in Europe and Africa.

It was during missions in Somalia, Egypt, Kenya and Sudan that he discovered excision. Having a vague memory of having heard about clitoris cutting as a child, he decides to look into the matter in his own community in Iran. This book is the result of research conducted between 2005 and 2015.

After a general introduction about FGM and its history, the Second Chapter allows a deep insight into the topic of FGM in Iran. The author begins with a review of the literature and notes a lack of studies on the subject, notably due to the lack of political support.

Nevertheless, it is known that the practice of FGM in Iran is more likely to take place in rural areas in three western regions (Western Azerbaijan, Kurdistan, Kermanshah and Hormozgan). The practice mainly concerns Sunni Muslims belonging to Shafi Islamic School. The practice varies greatly, in particular between language groups.

The most common type of FGM in Iran is type I according to the WHO definition, that is, ablation of the foreskin of the clitoris, the glans of the clitoris, or “pricking”. The first type would be the most common in Iran and the practice is justified by religion as well as the need to “purify” girls and / or control their sexuality (pre-marital virginity, fidelity of married women).

According to the author, FGM is a taboo subject in Iran and the Iranian government denies its existence or hides it from the general population. He highlights that the lack of funding and public support concerns both research and awareness-raising actions on FGM in the regions concerned.

Kameel Ahmady then goes on to describe his own research, which began in 2005 when he returned to his home region of Iranian Kurdistan. He discovered that FGMs were practiced there, including in his family. Through his first interviews he made a film about FGM, bearing the same title as the book and available on his website (www.kameelahmady.com)

He then decided to continue his work with a larger scientific study, thanks to the help of a team of students he had trained. A mixed qualitative and quantitative research was conducted between 2005 and 2015. A participatory methodology was adopted, allowing the women concerned to express themselves on the subject. A total of 4000 interviews were conducted in more than 200 villages in the provinces of Hormozgan, West Azerbaijan, Kermanshah and Kurdistan, including ¾ of women and a ¼ of men. The method was constructed based on the questionnaires used in the DHS and MICS studies.
The research group found evidence of the practice in several regions but also showed in which areas the FGMs are not practiced.

The end of the chapter presents the results by province and then by age group, showing that the prevalence is decreasing in all provinces even if in 2014 it remained significant in Hormozgan (1.5 million inhabitants). Women aged 30-49 were affected more with the practice than the cohort aged 15-29 in all regions.

The author presents various factors influenceing the prevalence rate: education, religion and household income. His study shows that the mother’s level of education is one of the most important factors affecting prevalence: the higher the level of education, the lower the risk that her daughter(s) will undergo FGM and the more she will be opposed to the practice. FGM is mainly practiced mainly by the Sunni minority in Iran while the majority of Shia do not consider it an Islamic practice, although it exists in some communities. Finally, the study showed a negative correlation between the level of income of the family and the practice of FGM.

Having conducted the study with both women and men, the researchers were able to show that in many regions women were more likely than men to support FGM. Qualitative interviews with women provided an explanation: women sought to ensure the possibility of getting married and having a good future and thus sought to protect the virginity of their daughters.

The third chapter presents the actions against FGM, at both international and Iranian levels, as well as the factors that favour or limit the work towards abandoning the practice.

FGM is often justified by religious obligation. Kameel Ahmady presents the approach of different Muslim schools present in Iran, encouraging or not FGM for women, as well as the different religious arguments presented by the protagonists and opponents of the practice. According to him, the Shia government in Iran avoids taking action against FGM because the practice is seen as belonging to the Sunni groups in remote areas. The explanation of the religious question, and in particular of the difference of approach between the Shia and Sunni Muslims (some Sunni schools), vis-à-vis FGM makes it possible to have a better grasp on the role that the religious texts (Quran, Hadiths …), the opinions of the religious authorities (Fatwas) and tradition play in its maintenance or abandonment in Iran.

In addition to research, in 2010 the research group also set up awareness-raising campaigns with women, men and religious leaders in order to accelerate change.

The author considers that these campaigns have had a positive effect on the decrease of the prevalence in the Country. However, he stressed the need to accompany the discourse on the harmful consequences on women’s health with clear opposition from the medicalization, in order to avoid a simple change in the type of cutting and encourage a total rejection of the practice. According to him, it would be propitious to explore the possibility of establishing alternative rites for girls.

Kameel Ahmady pleads for a community approach with socio-economic development measures in order to abandon the practice of FGM. All groups in society need to be integrated and the discourse addresses the basic needs of people as well as health and rights. Steps must be taken to strengthen the capacity of the communities. A special effort must be made to convince religious leaders to join the cause.

At the end of the book, Kameel Ahmady proposes a series of recommendations inspired by his research and by the opinions expressed by the communities themselves. These recommendations include among others, a greater involvement by the national government, involvement of religious leaders, training of health professionals, the development of psychological care and clitoris reconstruction, the commitment of the media, as well as participatory interventions allowing a privileged position for women.

In the Name of Tradition » is a very interesting book for those who wish to learn more and better understand the practices of FGM in Iran, still unknown by many.

The book gives access to debates and information that would probably be inaccessible to most people who do not read Farsi. That said, the book’s detail also makes it difficult, for someone who does not know Iran, to follow all the various villages, regions, and provinces mentioned. We regret the lack of a comprehensive map of Iran that would allow novice readers to better understand the size and location of various places cited. Some readers will quickly pass on the long explanations of such and such a community in such and such a locality that does/does not practice, to find more general remarks and syntheses at the end of the chapters.

The book also describes the steps taken by Kameel Ahmady in his research process, from the time he had the idea to look into this issue. The author also shares, albeit quickly, some of the difficulties that he and his research group faced during the study: lack of funding, travel problems due to bad infrastructure and weather conditions.

The section on religion is particularly interesting because it helps to understand the different approaches and have a deeper understanding as to why some Muslim groups in Iran oppose the practice while others support it.

It is regrettable that there is not a little more detail on the awareness-raising interventions carried out in parallel with the research, and on the way in which these interventions have influenced the populations concerned.
Finally, this book is a good start for anyone who is looking into the issue of FGM in Iran.

The documentary « In the Name of Tradition » can be viewed here (English subtitles).