Current literature on child labour largely highlights the harmful impacts of the practice on children’s physical and mental wellbeing.

Child labour is also a barrier in children’s educational and cognitive development and exposes them to dangerous and largely unregulated work environments.

Child labour has been condemned by the UNCRC (1989), a rhetoric that has widely influenced domestic labour legislations all around the world.

Nonetheless, child labour is a substantial part of informal economy in many parts of the world.

As one of the pioneering studies in the area, this paper looks into the dilemma of child labour in Iran and adopting a qualitative approach, it examines forms and lived experiences of working children.

Child labours in Bazzar of Theran

The study also examines the national legislations and governmental policies in the area and evaluate their effectiveness and shortcomings.

The paper concludes that child labour has its deepest roots in family poverty and therefore any meaningful solution needs to look into social inequality and justice in the society and worldwide.

The paper also explores some very interesting variations in the forms and existing practises of child labour and identifies the impact of gender, ethnicity, religion, and immigration on such experiences.

The story of child labour however as this paper examines is not the one that children have no voice, quite contrary this research explores the ways in which children express their agency in different forms and provide a sense to the harsh realities of their everyday life.

Child Scavenging in Tehran , Traces of Exploitation in Childhood “A Comprehensive Research on Forms, Causes and Consequences of Child Labour in Iran”

Download link of the Farsi version on google books:

As one of the pioneering field works on child labour in Iran, this research adopted a qualitative research strategy and interview and participant observation have been used as key methods of data collection.

Like any other research with children this research needed to address gate keeper including parents, employers and street gangs in order to secure access.

Identification of child labourers and access to them proved to be challenging as quite often children were afraid of their employers to take part in the research and this exacerbated during the pandemic.

In terms of theoretical framework, this research has its roots in grounded theory where ideas emerges out of narratives and children’s conceptualisation of their lived experiences as a child labour.

This research looked into some 27 economic sector of child labour and its geographical areas covers two major iranina cities; Tehran and Karaj and its neighbourhoods.

The age group of research participants varied from 5 to 18 In total, 312 interviews with children, parents and employers were carried out and the data complemented via extensive hours of participant observation.

Like any other research with children, this research had to reflect on several ethical dimensions including informed consent, confidentiality of data and the safety and well being of children.

Majority of children who participated in this research were street children and gaining parental consent was not something that researchers could achieve.

Despite this, outmost effort have been made to ensure informed consent have been achieved i.e.

the aims of research were explained to children and they were reassured that their involvement in the research is voluntary and could be withdrawn at any moment should they want to.

Despite all efforts the atmosphere of fear around child labour and children’s experiences or knowledge of the risk of getting arrested by the law enforcement agencies was a constant barrier in securing access.

Researchers also were conscious that children could be spied on by their (often illegal) employers and therefore researchers made sure notes are taken not during but after the interviews in order to minimise disruption to children’s life.

Due to the nature of child labour, finding mediators to reach to this group or building rapport with the research community proved to be a difficult task. The data however generated by tis research has been immensely valuable in opening a window to child labour in contemporary Iran.

Children worker in flower market in south of Tehran

Children are vulnerable minorities who always need care. Their protection from harm and exploitation is a very complex and difficult matter with long-term implications for society.

Waste picking by minors is recognized as one of the most harmful, worst and polluted types of child labour, in conflict with human dignity.

Waste recycling is a profitable industry in Iran, but unfortunately many factors such as the lack of separation of waste at the source, the lack of standard waste collection facilities and mechanisms, and the lack of training, have caused child scavengers to be seen simply as a collection and separation tool for this industry.

Informal waste segregation means that the industry does not abide by the labour laws and other standards in various occupations.

Workers in this sector are deprived of job benefits such as insurance and undertake very risky and traumatic work over long working hours in overly polluted environments.

These and other factors have attracted mostly Afghan immigrants and children to the waste industry.

The waste picking child is like a ghost, exploited with contaminated clothing and face and invisible.

This research showed that the millions of profits a year for recycling waste go to municipalities and in particular to contractors.

This finding becomes even more tragic when we know that every garbage collector collects up to 150 kilos of waste per day, but his or her share in the huge business is only 18% – which means that their shares from waste picking are only six percent.

Most waste picking children emigrate from Herat province of Afghanistan illegally, but recent economic hardship have forced Iranian families and children also to join this industry.

The main motivation of this research arose from the lack of comprehensive and targeted studies on the common phenomenon of waste management;

this book wanted to address the ignorance of this problem and the rising alarm bells on subject of savaging children.

The research investigated the phenomenon of waste management, examining its underlying factors in order to reduce its damage.

A study on Recognising, Preventing and controlling the phenomenon of Child Scavenging (Waste Picking) in Tehran
Publisher: Society for the Protection of Children’s Rights (IRSPRC) / Publication: 2019

Child Scavenging, the research report by Kameel Ahmady and the others, was published in 2009, sponsored and commissioned by the Association for the Protection of Children and Youth Rights.

22 areas of Tehran were investigated for the first time, in the hope that the results will be considered by public organizations such as municipalities, NGOs and custodians of children’s rights. 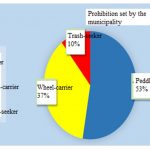