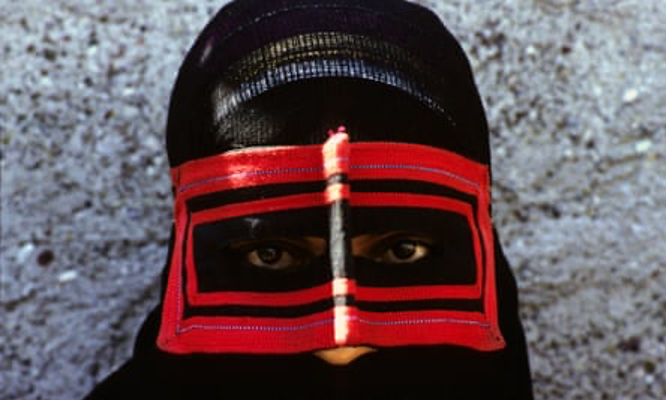 A woman wearing a niqab in Iran’s Hormozgan province, which has the highest incidence of FGM in the country. Niqabs are only worn in southern provinces.

The first authoritative study into female genital mutilation in Iran has found the practice is being carried out in at least four major provinces while officials are silent on the matter.

According to research by social anthropologist Kameel Ahmady released on Thursday, FGM is more prevalent in the southern province of Hormozgan and its nearby islands (Qeshm and Hormuz) than in any other parts of the country.

It is also being practised to a lesser degree in Kurdistan, Kermanshah and West Azerbaijan provinces, which are situated in western Iran close to the Iraq border.

Ahmady’s research shows that FGM is mainly an issue concerning the Shafi’i sect of Sunni Muslim Iranians, a minority in the Shia-dominated country. Only a small fraction of the Shia population living in proximity of Sunni communities practise FGM.

FGM is practised in Iran in some cases to tame girls’ sex drive before marriage; it is made to preserve their chastity, said Ahmady. “The attitude of officials and authorities is that FGM doesn’t exist in Iran. The Iranian public is also largely ignorant about the subject.

Ahmady first decided to focus on FGM in Iran when he was working with relief NGOs in Africa in early 2000s. Over the course of 10 years he has spoken to around 3,000 Iranian women who have experienced FGM in Iran, as well as 1,000 men. His research was published to coincide with the International Day of Innocent Children Victims of Aggression, observed every year on 4 June.

I returned to Iran in 2005 to study FGM in my home country and instantly I was shocked to discover that it even happened to the closest members of my own family and relatives, he said. In fact, many in Iran don’t have a clue that [FGM] is being practised in some parts of the country.

FGM, which has affected millions of girls and women alive worldwide, predates Islam and Christianity and has been practised in many different cultures and societies, from Coptic and Catholic Christians in Eritrea and in Ethiopia, to Beta Israel society, Australian aboriginal tribes and some parts of the Middle East and Asia. It is usually performed on girls between the ages of four and 12 and can include partial or in extreme cases total removal of external parts of female genitalia.

In Iran, the practice, referred to as Khatne or Sonat, is usually carried out outside hospital without anaesthesia or prior consent by amateur midwives. The tools used include sharp razors.

Mehrangiz Kar, a leading Iranian human rights lawyer, said it was tragic that such mutilation was carried out by women. “It’s one of those instances where the violence against women is carried out by women in unhygienic circumstances,” she told the Guardian. “In areas where FGM exists, unfortunately it’s usually the mothers who insist that their daughters should be cut.”

she was afraid of marriage

In at least one extreme case which had involved stitching up after cutting, Kar said an Iranian mother refused to allow her daughter to have her stitches removed before marriage. “The daughter told me that she was afraid of marriage; she feared she would have pain during sexual intercourse.”

Although Ahmady’s research is unprecedented in its depth, other people have also studied FGM in Iran, including Fatemeh Karimi and Rayehe Mozafarian, who have both published books on the subject. Mozafarian said that the Iranian authorities had let activists research FGM in Iran and had allowed those books to be published.

When people in Iran learned for the first time seven or eight years ago that women are being cut there, it was a cultural shock,” she said. “People didn’t believe that it was being practised.

Mozafarian said she had reached out to the country’s vice president for women’s affairs, Shahindokht Molaverdi, who is considering her proposal for a nationwide campaign to end FGM. Iran’s penal code criminalises mutilation but does not specifically mention FGM.

Mozafarian warned that in some parts of Khuzestan province, home to many Arab Iranians, an extreme form of FGM known as infibulation, which involves the removal of the clitoris as well as the narrowing of the vaginal opening by creating a covering seal, is being practised.

Influenced by events in the neighbouring Kurdistan region of Iraq, which prohibited FGM in 2007, female circumcision is in decline in Iran’s Kurdistan but still goes on. Hormozgan is less affected by that change.

Not all Sunni Iranians practise FGM, such as those belonging to the Hanafi sect or those living in other provinces. In West Azerbaijan, FGM exists among Sunni Shafi’i Kurds of Sorani dialect but not among Sunni Shafie Kurds of Kermanji dialect, Ahmady’s report shows. In Iran’s Kurdistan, where prevalence of FGM is patchy, it is mainly seen in rural areas, some villages and communities but not usually in urban areas. Even in provinces where FGM exists, many communities do not practise it.

“The majority of women I spoke to who were circumcised defended FGM, saying that it is a tradition that had existed for hundreds of years,” said Ahmady. “Some Sunni mums even boasted that their daughters were more virtuous than the majority Shia girls because they were cut.”

Shia clerics also avoid interfering in what they see as a Sunni issue. The government, wary of inciting anti-Shia sentiment among the country’s Sunni minority, is also largely quiet. In Hormozgan, minimal traces of FGM is seen in Shia communities in some village, the report shows.