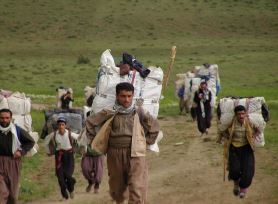 The ‘mountain porters’, typically Iranian Kurdish men and few women of all ages who risk health and safety to earn a meagre living illegally carry goods of all kinds across the Iran/Iraq border, are a group whose lives are absent from our understanding, despite the central geographic location they occupy in current global politics.

Recent region’s political events and other aspects of Middle East peace, has garnered much media attention to this part of the world. What we know little about, however, is the affects this has had on domestic policy and the situation of minorities in today’s Iran. Lacks of clear policies have long resulted in severe underdevelopment in the peripheral regions that Kurds and others call home. With Iran’s 2/3 under age twenty five high rates of joblessness, scarcity of opportunities and a general sense of hopelessness amongst the young people is daily struggle.

Developments across the border in Iraq, an opening up of trade, and new levels of affluence, particularly in the Kurdish north, has meant an increased demand for consumer goods. Heightened by corruption amongst border officials from both sides, this has led to a perfect setting in which black market economics can flourish.

The mountain porters, with few opportunities for earn a living through legal means, fall victim to these conditions and become an essential part of the black market. Earning less than $2.00 a day, men as young as 14 and as old as 70 make the long journey through the heavily mined mountainous region, facing Iranian authorities, possible fines and jail terms, and occasional shoot-to-kill practices by border guards. They then sell goods, usually petrol, to smugglers who will bribe border guards in order to carry it across to Iraqi territory. These canisters of petrol are sold on the roadsides throughout northern Iraq, one of the most oil-rich nations on the planet. On return journeys into Iran, they generally carry cartons of cigarettes. This documentary footage gives us the rare opportunity to look at real conditions in the much publicised Middle Eastern region, and to explore the human costs of domestic and foreign policy by the governments involved.

More importantly, it gives and a voice face to those most affected, allowing regular men to speak for themselves about their lives under all this compel.