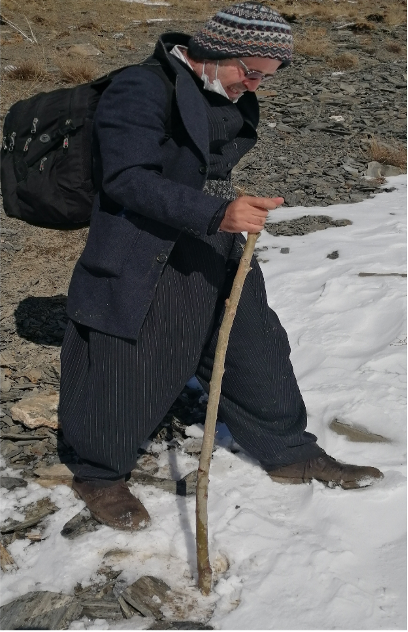 Eventually I made the decision which I had been struggling with

For a long time – the decision to escape

In late December 2020 I fled Iran, in order to escape a judgement by the revolutionary court that I should be imprisoned for nine years and three months.

Eventually I made the decision which I had been struggling with for a long time – the decision to escape. It was a move I had to make under enormous pressure without many options although I had always felt a strong responsibility to stay on and continue my work.

I knew that my departure would take me far away from the location of my mission and my field of work. It would mean leaving behind whatever I have achieved until now. But those in Iran who have an iron fist left me no option but to pack my bag for my decisive journey. Despite the fact that as a fighter I had learned to stay until the last moment and preserve my hopes and dreams, the judge’s over-ruling of my appeal and approval of my conviction by the appeal court was the last straw. It was the proof that reason, conscience and justice do not exist here and it is politically motived.

Now although the sorrows of separation are wounding my soul, I am proud that my humble achievements have led to an awareness and the subsequent modification and reduction of harmful traditions practices (HTP) such as female genital mutilation (FGM) and early child marriage (the research studies which led to my conviction) in and nearby Iran. My independent research brought to the surface social problems and miseries such as temporary marriage, white marriage (cohabitation), child labour and child scavenging, as well as illustrating the depravation of vulnerable groups such as lesbian, gay and bi- people (LGB), and unrepresented minorities and ethnicities in Iran. These are subjects that the system and narrow-minded groups still do not have the tolerance to deal with or even consider.

Along my journey I have endured immense pain and suffering, wounds that came to my heart and soul because they were from some previously close colleagues, and hidden tortures which the system inflicted on me in order to repress me. They did whatever they could in order to suffocate and silence me. Their harassment led to the restriction of my presence in seminars and universities, cancelling permissions for the publication of my new books and the elimination of my essays from newspapers, journals and scientific and academic websites. The most painful of all was labelling me as an infiltrator and subsequently accusing me of “infiltration”.

Pressures increased and amounted to censuring my interviews, snatching and stealing my mobile phone, hacking my emails and social networking accounts, invading my privacy, forcing people to confess and act against me and ultimately my arrest and imprisonment which was the last straw of these already unbearable pains.

After receiving the sentence for my detention and enduring one hundred days in prison and isolation, and also after long, extrajudicial interrogations and false accusations, my case was finally sent to branch 15 of the revolutionary court presided by Judge Salavati who has no independence and expertise to deal with matters concerning scientific research. In the end, after two staged, farcical court sessions full of legal flaws, they issued a sentence for nine years and three months in prison charging me with, among others, siding with the United Nations 2030 Sustainable Development Agenda. This sentence was based on the recipe of my interrogators, the group in charge of fighting the ‘soft war’. There is no doubt that I am proud to be considered the possible composer of the 2030 Agenda, but I am surprised to be accused of implementing it through my research. The reason is that The United Nations Agenda was composed several years after my research and could therefore have no possible connection with it.

What I have been through for the past one and a half years, is the story of a sad tragedy whose sequence, although real, is unbelievable. The Revolutionary Guard security system intended to introduce me as one of the main tools of the “infiltration scenario”. The story of my life from childhood to the time I was a student and my social activities were all a tool in their hands.

They had come to the conclusion that I had been trained as a teenager for the purpose of infiltration and overthrowing the system. My accusations were, among others, learning, in the British universities, how to lobby, in charge of youth and human rights branches of, for instance, The Labour Party, being in charge of the media section of the labour rights and the human rights section of The Amnesty International and being the senior advisor to The British Royal Court of Justice.

My trip to Palestine 15 years ago as a student visit was interpreted as a BBC mission in Israel. According to my accusers, I was the founding promoter and theorist of a rising age for child marriage, a man who advertised the rights of LGB groups through his research, modified and enacted laws in order to change the Islamic way of living and even did research about ethnic disintegration of Iran.

The research salary that I received from an NGO was called indecent, illegal income which now I have to return a hundred-fold to them. Infiltration in the parliament and government’s body for changing laws was my other accusation. As if, according to my chief interrogator, I had the potential for being a valuable asset, having all the elements: being a Kurd, coming from a Sunni background, being also British national, and doing research on sensitive social subjects, as well as being an activist in my own field of research. I had everything on me. “I was the full package”

I know for sure that my prison term is a tool for the Iranian security services and the justice ministry to intimidate and pressure the remaining few people who are working on social issues such as civil activists, NGO and other researchers.  I am fully aware that my departure will be claimed as a winning card for them. It will allow them to justify themselves to legitimise their accusations and harass people as part of their planned so called “scenario of the third infiltration”. But I decided to leave because I was unable to be indifferent to the fate of my only child. I could not allow them to silence a voice that had cried out about social problems for 10 years. My stay in a system that is opposed to any dialogue and concession would have given them a chance to take another human being as a hostage.

I know from the kind thoughts and encouragement over past two arduous years of my many friends and colleagues around the world that my research is valued, and that we who work in these fields must never give up or be silenced.

Eventually, in a bitterly cold, dark night, I embarked on a journey. Every hour of that unforgettable night, with every path that opened before me through the tough route, I wondered whether there are any roads more impassable than prejudice, ignorance, tyranny and isolation from the rest of the world.

Kurds are known to have no friends but mountains; on the night of my departure, with no lantern to light my path but the white snow, I realized again that the mountains were giving me a shelter and aiding me to start a new beginning with even stronger determination.

It’s really lovely being back in the UK in such beautiful multi-cultural society where I found myself and learned so much about tolerance and respect for human rights. It’s been an incredibly difficult time for me and my family and now it’s an opportunity to get on, settle down and rebuild our lives in peace.

I am not gone and will never be gone. I will undoubtedly return to the field of my research and studies, even if it be in a land which is so many miles away from my desired target groups. I will not put my social, scientific and civil responsibilities down. I will love more, hope more and learn more and do my best to realise the dreams I have for peace and prosperity.

I believe that with such an approach one can pass through the most adamant prejudice, tyranny and the most impassable ignorance. I will continue firmly to believe that dialogue will be a bright lantern on the dark path of ignorance opening ways to salvation. We must never step on this road alone allowing hope to wither and die in people’s hearts.

PS: The main parts of my verdict and summary of my defence can be accessed on my website through the links and files at the end of this statement. I decided to make these public in order for people to know how and why I was sentenced accusations I have countered with real evidence that I believe will prove my innocence. Let them be recorded in history, which is the best judge.