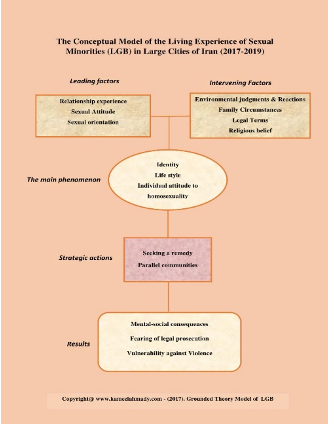 Homosexuality has always been a contentious topic in Iran due to the stigma surrounding the homophobic views of certain members of society, which related to a “radicalized view of sexuality, cultural norms concerning sexuality and gender, and connections to religious institutions (Moghissi 2016). Iran is a traditional society that operates on a basic premise that homosexuality is an abnormality. Traditional society dealing with what are assumed abnormalities such as heterosexuals is not a new story in Iran nor is the combat against it, but the manner in which Iran exposes perceived “abnormalities “to maintain control over its sexual the minorities is yet a controversial issue rooted in its past and carrying  on in the present.

An extract from the work of Mehrangiz Kar concludes that “Members of the Lesbian Gays and Bisexual in Iran are viewed as the ones who depart significantly from mainstream religious values or social expectations. LGBT rights activists thus face huge obstacles in their efforts towards accommodating their identity in the current context of Iranian society”.

In Iran there is no standardized measure of gender binaries. Sexual desires are bound to intricate deep-rooted ever-lasting social definitions to such a significant extent that sometimes it is difficult for homosexuals themselves to distinguish, understand and accept their own orientations. In Iran, when enquiring about someone’s gender, one cannot find an appropriate response that yields a third possibility. Either one is a man or a woman. This fact is so categorically clear cut that it has left no questionable room of doubt.  Any departure from this dual sexual system of classification in Iran is categorized under the auspice of mental and behavioural disorders. Iran emphasizes the complementarity and unity of the two sexes, each associated with distinguishable gender roles. Given that homosexuality can undermine the Iranian patriarchal social structure, Iran and Islamic ideology strictly oppose homosexuality (Afary 1997).

Interestingly, amongst all members of LGBT community in Iran, bisexuals are the one category in the sexual orientation framework that receives less attention. This area of research of bisexuality in Iran suffers from the lack of available literature and the overriding rationale that bisexuality in Iran is a sin.  The general perceived notion in Iran is not favourable for this category of LGB. Even homosexuals consider bisexuality is not only an insult to heterosexuality, but is not even categorized in the Lesbian-Gay binary. In many respects, bisexuals are viewed as the “unacceptable” within an already unacceptable group. In addition to thorough analysis of the LGB discourse in Iran, this research study also revealed an uncomfortable fact:  the un-acceptance of bisexuals was the norm and frequently the familiar attitude.

This light-handed approach is not the same for women. LGB have been oppressed during the sociocultural transformations in contemporary in Iran while femiphobic attitudes have been central to this marginalization. Notwithstanding the profound distortion of the concepts of femininity and masculinity in the course of the modernization and islamization of the country, defeminisation of the public space and prioritization of the masculinity in gender discourses have been crucial to all social transitions that intend to feed their desired social-ideal identity.

What is more revealing is that women, even amongst the sexual minorities (Lesbians) in comparison to gays and male bisexuals, suffer more from  societal restrictions and risk harsher social repercussions and punishments when caught (Blumenfeld 1993). Women are already marginalized in Iranian society as the demands of their patriarchal society and draconian policies define their existence (Afshar, 2005). They are even more so marginalized if they are lesbian. Frequently familiar and none at all surprising is that there is a heightened level of discrimination towards women even within the category of sexual minorities.

Read more: The Narrative of LGB in Iran and the Chronic Closet