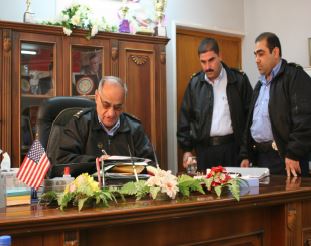 This exclusive footage follows a day-in-the-life of the current police chief of oil-rich Kirkuk, on the eve of his retirement and during a time of great change in Iraq. Never before has a camera crew been granted permission to film such up close footage.

An Iraqi Kurd charged with the challenging task of keeping peace in a diverse and divided city of Arabs, Turkmens, Assyrians and others with majority of who are Kurds, now at the centre of a tenuous federal coalition, Hiwa Sherko is in a vital position of leadership in the new Iraq. Nonetheless, coverage of the city of Kirkuk which predominates in the media gives us scant opportunity to consider the human side of events there, and to look up close at the people who keep things running on the ground. Here, he takes us through his world from Police Headquarters, through the heavily guarded city streets and into his home. Sherko is a man in a risky position, having been the target of four assassination attempts while in office. We observe him in the course of his duties receiving American Forces officials, debating the justice system with his solicitor son, and pondering the future of the city as he prepares for retirement.

These interviews reveal chilling information about how Kirkuk remains a city in the hands of the US Armed Forces, and how the justice system is dominated by judges who retain their sympathies with the former Ba’ath regime. His son, a trained solicitor, tells the camera of the current system in which terrorist insurgents, once caught, are brought through the courts only to be released to re-offend. He gives candid opinions about corruption in today’s Iraq, the treatment of insurgent terrorists, and the future hopes for a peaceful Kirkuk as a cosmopolitan city of diversity.

Throughout, we also see scenes of everyday life on the streets, in the shops and cafes of Kirkuk, showing us a side of the city and of the lives of normal Iraqis which are frequently obscured by more sensational coverage, but which are all the more fascinating for their relative scarcity and the day-to-day events they record.

We see regular Iraqis from all ethnic backgrounds and walks of life, Sherko among them, speaking for themselves about issues which matter to them. In most cases, the concerns are the same regardless of their social position; shortages of petrol and electricity, unemployment, and lack of security.

Bombings remain a daily reality on the city’s streets.

This rare glimpse behind the scenes into the daily social world of the people, from the perspective of a civic leader who by his own admission ‘does not live like other government officials’, is an important and timely contribution to our understanding of a nation taking its first steps towards democracy in a tense, chaotic, and often violent environment.