The methodological approach adopted by this research is designed as a qualitative large-scale method. As no previous sort of research was available to refer to, or known methodology had been already implemented in Iran as a comparative analysis, research methodology compatible to the subject matter was absent. This clearly point to a need for a comparative study  of  different  states  with  high  prevalence  rates  of  child  marriage within Iran that  would  help  in identifying  the  similarities and  differences  in  the  factors  leading  to  child  marriage. The genuineness of the research and its novelty of scale and purpose determined the steps and forms of each method.

Considering the fact that hardly any research of this dimension of ECM in Iran been undertaken in this field, the task was highly challenging and the methodology evolved was dynamic. Methodological decisions were completely flexible depending on the different variations that the research faced in each step. Population size, sample size, sampling method, number of interviews in each district and even the time spent in a particular province was a reflection of the prevalence percentage of ECM. Considering all the variations and differences, the methodology of research was adopted to fulfil what is needed in this crucial step. It is worth mentioning that the methodological decisions are unique and tailored for this sort of gender sensitive research, based on the program areas’ unique characteristics. These decisions might not be applicable in other contexts.

To explore the program areas, the study narrowed the search to selected designated areas of interest by using the data from the National Organization for Civil Registration. Seven provinces with the highest rates of registered child marriages were selected.

The provinces were chosen by analysing the recent decade’s available data on registered marriage cases. This was based on calculated demographical information of the most recent decade. It is to be noted that the ranking order in this list is not the same as the lists previously published by the government, as the ranking order is was based on choosing the provinces with the highest ranks of ECM’s prevalence. Accordingly the seven provinces are as follows:   1. Razavi Khorasan, 2. East Azerbaijan, 3. Khuzestan, 4. Sistan and Baluchestan, 5. West Azerbaijan, 6. Hormozgan and 7. Isfahan. 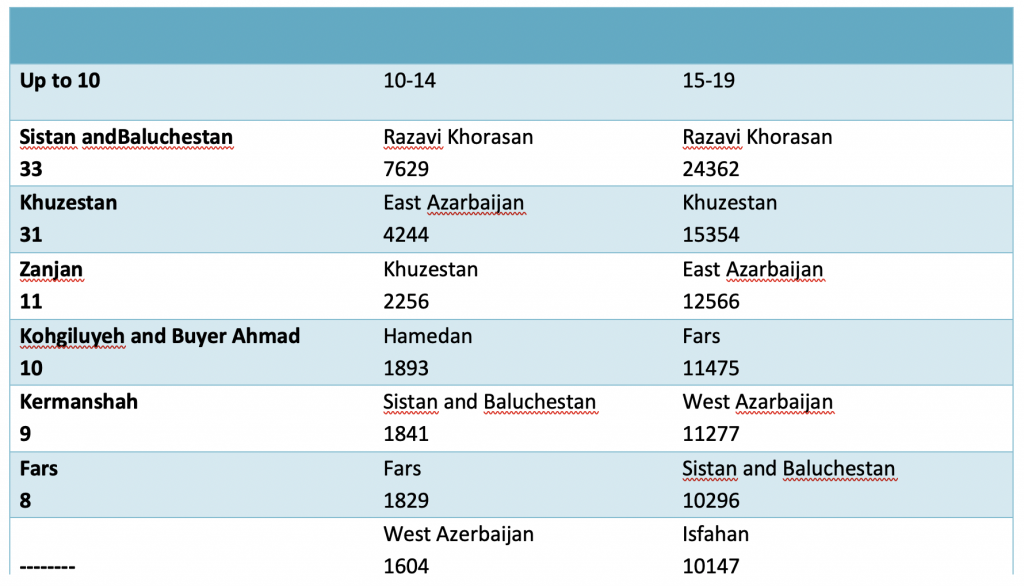 groups: less than 10’, ’10 to 14’ and ’15 to 19’ years of age that were selected and ranked. Though seven ranked lists of marriage events (categorized by age groups, gender and total numbers of each) within the last ten years were drawn upon.

Table 3-1; Marriage ranks in 2014 sorted by age groups and gender

The broadness of the program areas, budget and time constraints, and limitation of funding necessitated the use of cluster sampling functional. By using cluster sampling, several towns located in the north, south, east and west of Iran were selected for the first cluster. Accordingly some villages of each town were selected as the next cluster.

The number of interviews in each province was based on its rank in the latest rank table. Accordingly all program areas had required different numbers of interviews. Although the questionnaire used in them was a local edition of Demographic and Health Survey (DHS) questionnaires a great part of which was researcher-made. The study utilized household survey data from DHS to assess child marriage levels by country and provide further analysis of how ECM correlates with additional indicators. DHS are nationally representative household surveys designed to measure the health and nutrition status of women and children in developing countries.

In order to use DHS standard questionnaires in this study, it was vital to make some changes and modification in order to translate the questions into local languages and make it user-friendly. Based on the specific cultural differences and variations in each district, adjustments were necessary. Structured questions, as well as observations, were obtained through interviews and used in the categories of Background, Marriage, Marriage Decision, Female Reproduction, Male Reproduction, Gender Attitudes, Female Sexual Violence and Male Domestic Violence questions. The questionnaire focused on the prevalence and causes of child marriage in iran the surveyed areas. This above mentioned type of questionnaire was used in interviewing only local people. The study that also contains viewpoints and interviews with authorities, governmental figures and religious and community leaders influenced and changed the types of questions asked. The procedure tends to vary structurally.

Read more: Feminization of Poverty-The Cause and Consequence of Early Childhood Marriages in Iran