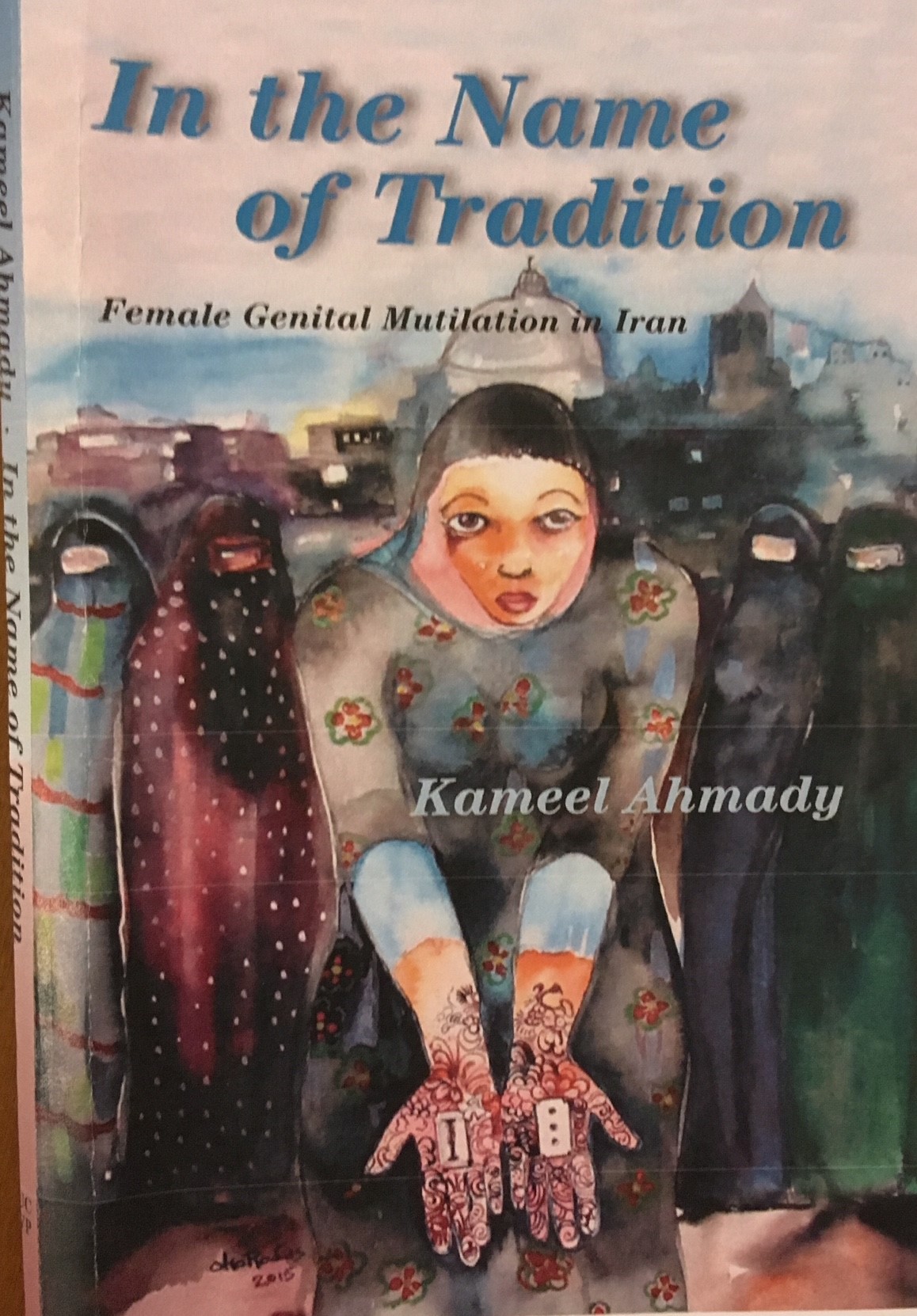 Kameel Ahmady: His Book ‘In the Name of Tradition’

My friend and colleague Kameel Ahmady, the British-Iranian social anthropologist and #EndFGM / #EndChildMarriage scholar, has been detained in Tehran.  His wife, Shafagh Rahmani, says he is held in Evin Prison on unknown potential ‘national security’ charges.
[January 2021: Kameel has now escaped to London.]  This may be a good time to draw attention to Kameel’s first book in English, In the Name of Tradition, which reports on his research on female genital mutilation (FGM) in Iran.

The book was published by UnCUT/VOICES, a specialist #EndFGM publishing house owned by another very good friend, Tobe Levin.  She and I edited it and were so impressed by the work that we added a jointly written Afterword.  Here it is:

In the Name of Tradition (2016), UnCUT/VOICES Press

By Tobe Levin and Hilary Burrage

Is female genital mutilation an African issue? A women’s problem? A religious requirement? A feminist concern?

Playing devil’s advocate, the answer in every case is that FGM shatters these limiting frames. Ablation of girls’ genitalia isn’t the unique concern of Africans, women, theologians or feminists. Ending FGM requires all people of good will.

And thanks to Kameel Ahmady and his team’s research, the facts are out. Sharp metal objects bite vulvas in Iran, thus providing certainty that FGM exceeds the confines of a continent known to have birthed our earliest recorded ancestor, the woman archaeologists named Lucy. Indeed, these facts imply excision’s spread from a Blue Nilotic epicenter to be taken up, for complex reasons, elsewhere around the globe.

Moreover, Kameel Ahmady is a man who questions male peers to reveal degrees of men’s involvement, broadening ownership and thus accountability beyond the female sphere. Regarding religion, Ahmady opens the door to Farsi discussions inaccessible to most readers of this book, and what he shows is a fascinating potpourri of clerical back and forth. Writ large in most analyses of genital excision is the custom’s absence from the Koran and indeed from the scriptures of most faiths. Yet we find the local mullahs differing as to the duties of their flocks. Some tell the devout that releasing clitoral blood is not forbidden; others recommend it; still others leave the decision to the grown-up children; many also counsel against it. Ahmady himself is sure: Islam doesn’t condone ablation of a child’s genitalia given Koranic commands to ‘do no harm’.

And as a feminist issue?

Here, too, Kameel Ahmady stands out among students of these ‘rites’. Though in youth he had suspected it, only later in life did he learn of his own female relatives’ victimization; empathy with his mother and sisters spurred him to take up the abolition cause. He supports women’s empowerment. He understands the challenge to self-confidence resulting from the symbolic and actual infliction of a disability. He sees that clitoral attack, beyond rationalizations and even in the mildest forms that leave few or no physical scars, affects the mind. Why should female organs of sexuality and procreation be handled fiercely rather than gently? What possible psychological reality could account for such behavior as espoused by individuals and groups when the act itself is surely counter-intuitive for everyone?

Anthr/apologists have a ready answer: pain itself is valued. If, however, this explanation once sufficed, it does so no longer as human and children’s rights have, since at least World War II, presented themselves as universal standards to which Ahmady unequivocally subscribes. Thus, if we define feminism as the theory seeking to enhance the world by cleansing it of gender-based discrimination, FGM is a feminist issue par excellence.

As Verena Stefan writes, “No little girl in the world would, by herself, think up such a thing as placing clitoris and vagina in competition with one another, de- and revaluing them, creating an arbitrary conflict between two parts of her own body or, out of the blue, resolving to amputate a healthy organ.”1 Rather, “the clitoris appears as the primary threat to a phallocratic world view and to the power of individual men.”2

Ahmady never loses sight of this, reiterating (often) the challenges for him, as a man and a feminist, in trying to stop FGM in Iran. One of his most poignant scenes concerns the colloquy of males newly informed of what the custom brings women — risks and pain. “Later [the men] were asked whether, in light of their new knowledge…, they would be willing to have their daughters cut, thereby exposing them to the same agony in bed and perhaps to a husband who cheats. Our interviewees could not answer. Instead,” Ahmady writes, “silent, they looked away.”

We both agree, Kameel Ahmady’s feminist stance is well-defined.  The two years of our collaboration, editing his research report to enable publication, have revealed yet again that matters exist unconfined by national or so-called ‘cultural’ boundaries. We meet men as well as women, in every part of the world, for whom self-determination and bodily integrity are rights everyone should enjoy.  As Ahmady has consistently demonstrated in our dialogues in cyberspace, he is one of them.  The right to be free from assault and pain, ‘even’ in the name of tradition, is an entitlement guaranteed to all.

In this belief Ahmady joins an increasing number of men, each applying his prism or lens to interpret what he has observed or uncovered.  This distinguished cadre of male campaigners against FGM includes activists from many corners of the globe – Morissanda Kouyaté, the Guinean medical doctor who leads the Inter-African Committee in its work; Samuel Leadismo, Evanson Njero, Gerald Lepariyo and Tony Mwebia, all activists in Kenya; the artist Godfrey Williams-Okorodus of Nigeria and Belgium; and advocates Ahmed Hassan and Ahabwe Mugerwa Michael in Somalia and Uganda respectively; Qamar Naseem of the human rights organization Blue Veins in Pakistan; the attorney Dexter Dias QC in the UK; Dr. Pierre Foldes in France; Thomas von der Osten-Sacken of WADI in Iraq, and Holger Postulart, director of the Global Alliance Against FGM based in Geneva.

The net is closing.  FGM is being called out and will be defeated by people of different genders, many traditions and creeds, or indeed of no creed at all other than the belief in the universality of human rights.

Beyond the critical significance of these inalienable rights, Kameel Ahmady’s focus, like that of his male co-activists identified here, also demonstrates another deep truth:  the world over, men as well as women can subscribe sincerely to the feminist ideal.  Feminism, they understand, is not about setting women against men; it is about revealing the grim truths of patriarchy, that system which disadvantages many women and some men in the interests of a powerful male minority.  Both women and men, they acknowledge, can co-exist more happily and safely when the tools of repression employed to subjugate women are identified and challenged.

The work of unveiling the cutting culture in hitherto unrevealed places, in locations in Iran and elsewhere, is only just beginning, but it could not be more important in the struggle to make FGM history.  Kameel Ahmady’s contribution to that work is enormous.