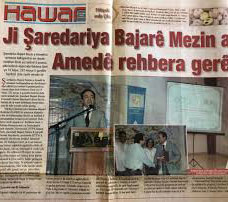 2009 Best Research Award of the Mesopotamian Centre for Publications of the GABB municipalities’ first truism and ethnographic book. The Award was given for coordination of Another Look at East and Southeast Turkey: A Traveller’s Handbook to East of Turkey that was published in Istanbul. The book focuses ethnographic attention on the fifteen provinces of the Kurdish area of Kurdistan of Turkey; printed in English, Turkish and Kurdish (Kurmanji). This book is a travel guide to these areas but also moves beyond conventional travel guides, asking readers to revise perceptions of backwardness in the region and see that behind recent militarisation it has a very long and glorious history. This award was presented to Kameel Ahmady by the Mayor of Diyarbakir, Osman Baydemir, who later became a member of the parliament and is currently living in exile.