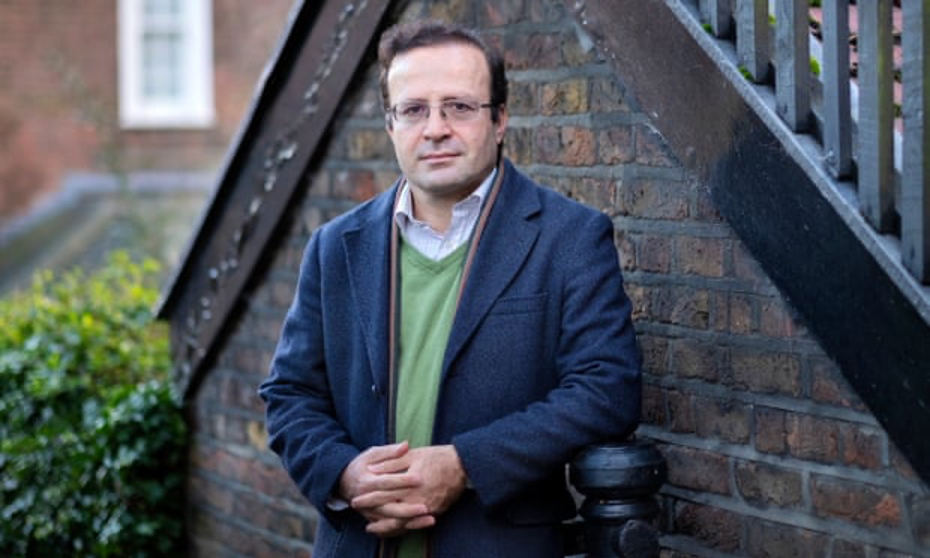 Academic jailed in Iran pulls off daring escape back to Britain

Exclusive: Kameel Ahmady smuggled himself out through mountainous border after being sentenced to nine years

Kameel Ahmady was found guilty in Iran of conspiring with hostile foreign powers.

A British- Iranian dual national sentenced to nine years and three months in jail in Iran for co-operating with “a hostile state power” has smuggled himself out of Iran, escaping over the country’s treacherous mountainous border, and is now living in London.

In an interview with the Guardian, Kameel Ahmady explained he felt had no option but to flee after spending nearly 100 days in Evin prison, including a brutal spell in solitary confinement while he was being interrogated.

“Once I had been sentenced I had a choice of whether I would stay and not see my family and four-year-old child until he was 14, or to risk fleeing,” he said.

Ahmady, a social anthropologist whose research revealed the extent of female genital mutilation (FGM) in Iran, was found guilty of conspiring with hostile foreign powers in November 2020, among other charges, but was released on bail pending his appeal. He was also fined more than £500,000.

He said given how Iranian courts normally confirmed the first judgment and because of the political motivation for the trial, he had not held much hope his appeal would succeed – a view that was confirmed when it was rejected in absentia on Monday.

Ahmady said he did not yet know whether Iranian officials realised he had escaped the country.

He escaped carrying only his laptop and copies of the books and articles he had published, crossing the border through snow 1.5 metres deep and fog, evading Iranian border patrols. Border security has been heightened ever since the assassination of the Iranian nuclear scientist Mohsen Fakhrizadeh in Tehran last year.

“I am Kurdish by ethnicity and I know some of the routes, but it was very dangerous,” he said. “I had to try several times.”

Ahmady followed the paths used by mountain porters evading US-imposed sanctions to carry alcohol, car parts, medicine, cigarettes and contraband from Iraq and Turkey. But the routes are hazardous: one smuggler carrying four tyres on his back was recently shot by border guards, while several others have frozen to death.

He said he feared if he had been caught he would have faced more years in jail, but he had to take the risk. “I smuggled myself out of Iran out of despair,” he said. “I felt I had no other choice or option to leave. I was banned from travelling. I had this bounty and this sentence.”

Others claim that his story is even more complex and days before the court trial allegations of serious sexual misconduct by Ahmady surfaced on an Instagram account. A burgeoning #MeToo movement had started in Iran at the time, and some of the stories were anonymous.

The allegations eventually led to him being removed as chair of the Iranian sociological society, and his critics say the revelations may have contributed to his decision to flee on bail.

He insists the allegations are untrue. “I find these allegations very upsetting. As I said at the time I take full responsibility for my actions, but I do not accept any of these allegations. They are not related to the charges brought against me by the court which led me to escape to restart my life in safety with my family.”

Ahmady is one of a small number of British Iranian dual nationals, including Nazanin Zaghari-Ratcliffe, who have been arrested in Iran and held apparently for bargaining purposes.

Born in the multicultural town of Naghadeh, populated by Kurds and Turks, in Iran’s West Azerbaijan province, Ahmady left Iran for the UK when he was 18, but returned in 2010 to look after his elderly father.

He was first arrested on 11 August 2019 after returning from a UN human rights conference in Ethiopia, which he attended in his role as an expert on FGM and child marriage. His family made his arrest known two days later.

He believes he was taken by Revolutionary Guards partly due to his research work and also because Iran was looking for British assets to seize as a reprisal for the British marines helping to seize an Iranian ship, Grace 1, off Gibraltar on 4 July 2019. The ship was suspected of breaching EU sanctions by taking oil to Syria.

He was formally accused of trying to secure socio-cultural changes in the Islamic Republic by lobbying to raise the age of child marriage, promoting homosexuality and maintaining contact with foreign powers.

“By the first week of the interrogation, the British ship was released, but I had no access to media. I was in solitary confinement. So the only source of information I had was the interrogators. And one day, this guy just came and he was so happy. He said, ‘Thank you. Thank you very much. We got our ship back. And I think you made a difference here. So thank you for this, but we still really have a long way to go with you.’

Ahmady said he had been harassed for long time prior to his arrest after he became a target of the Revolutionary Guards which started to object to his research into FGM, child marriage, temporary marriage, ethnicity, and lesbian, bisexual and gay relationships.

He said his phone was snatched on the street and soon after all his accounts including his emails were hacked. He found himself being banned from speaking engagements or seminars being cancelled at the last minute, especially after he gave media interviews and was invited to give a presentation to a group of Iranian MPs to raise the age of child marriage from 13 to 15.

A bill raising the age was passed by a majority in the parliament but soon after blocked by the legal commission. The actual age of child marriage can fall to nine with the permission of the parent and the court.

He said ever since the spring of 2019, and the start of the harassment against him, he had been preparing himself for arrest. But when it happened the reality was still a shock.

“It is like they have been ready for you for months or weeks. They are very good at it, they are trained as to what to do at different stages. They know what to do, how long to interrogate you and exactly when to do it.

“They started on me in a very, very small room, it’s almost like a grave. You have three army blankets, one as a cover, one to sleep on and one as a pillow. For 24 hours there is a bright shining light on top of your head, a Qur’an, a mohr on which Shias pray, and a phone to contact the guards to take you to the toilet.

“There is no natural light, and a window in the prison door opens through which they put your food. That is your only communication with the outside world. It is incredibly quiet, and you just become crazy. You don’t know what time it is, and you don’t know what will happen next.

“When you are taken out to go to the toilet, or half an hour’s fresh air or to be interrogated you are blindfolded. And then your interrogation becomes your lifeline, it’s so sad that you want to be interrogated more because that is the only way you can communicate with a fellow human being.

“They were trying very hard to portray me as someone sent off to Iran by the British, recruited by the foreign powers to try to influence certain people in the government.”

Ahmady said that after about a month they moved him to a slightly larger room where he could walk in a circle. “It had a toilet and it felt like Buckingham Palace.”

His case was delayed due to the Covid outbreak. “In the trial Abolqasem Salavati, the judge in many controversial human rights cases, was very condescending, and you could tell from his questioning that he has made up his mind.

“Although he had all my books and research he took no interest in them. In fact he had no knowledge of social science and no experts were present or allowed to provide professional opinion. The only things that concerned him were my dual nationality, the number of years I had been in the UK, the universities I had attended. The whole purpose of the questioning was to link me to the west and my infiltration as part of a bid to change the Islamic way of life.

“At one level I knew I was in trouble. There was a time in prison when my chief interrogator came down the corridor – I knew it was him from the sound of his steps – and he was smacking his lips. He said, ‘Kameel you are delicious. First you are a Kurd, second thing you come from Sunni background, most importantly you are British and researching sensitive subjects. We can bargain with you. You know how it works.’”

But he said he still thought he would get away with a warning or some sort of suspended imprisonment.

But Salavati found him guilty and his judgment, released by Ahmady, shows quite how ideologically the regime was opposed to his work on FGM and early child marriage and how convinced they were that he was working for hostile powers.

Salavati said Ahmady had taken courses at universities where “subversive institutes and centres relevant to spying services organised these courses”. It was possible, Salavati said, “that the spying services invested in people like Kameel Ahmady, educating and training them to penetrate in the Islamic Republic of Iran many years later”.

By holding campaign meetings with Iranian MPs trying to raise the age of child marriage, Salavati found Ahmady had sought to undermine Iran.

Salavati said in his judgment: “Generally, it can be said that increasing the age of marriage for children is one of the strategies of the enemy for weakening and ruining the family system; and that Mr Kameel Ahmady is one of the leaders in the implementation of this strategy in Iran.”

Ahmady said: “When I was told the length of the sentence I thought it was a joke. I never thought they were going to hand out 10 years. Everybody was shocked.

“At first I was adamant I was not going to leave. I have been a fighter all my life but now I must change my battleground. I just thought what am I going to do?

“I knew if I was caught trying to escape it would be open to all sorts of interpretation that I was who they said I was, I was being rescued by a foreign power, I was transferring data abroad.”

He said he would like to have a role in helping create a dialogue.

“The Islamic regime is run by a small minority, the so-called hardliners, but that generation of leaders are dying out.

“Most people, those not making a living from high politics, corruption, are not reformers or fundamentalists but people who want to see change. There is a hint of hope after the years of hardship and sanctions that have brought people to their knees and crippled the economy.

“If negotiations restart, it’s very important that Iranian civil society and opposition groups are heard on issues like human rights. Nothing good ever came out of conflict and fanaticism, and I say that from personal experience.”

This article was updated with additional details on the day of publication.